What is your quest?

Yes, another EDH legend was spoiled, so here comes a new review of him. This General is different than the ones we’ve normally seen in this color. It’s a little odd to see his ability (one you can easily abuse), but it can be used effectively to make sure no one messes with you.

But first, take a look at that art. There are some Generals that look wimpy, or rely on their smarts or ones you might think you could take in a fight. It looks like this guy will tear limbs from you if you ever cross him. Good thing we’re going to make him happy.

Again, if you want to be kept from spoilers, go no further. Otherwise, let’s see what we can do.

if we don't get no tolls, then we don't eat no rolls.

Doug Beyer’s Savor the Flavor on the Mothership has given us a new General. If you skip the text box for a moment (don’t worry, we’ll get to that) you’ll see that he is pretty beefy. A 5/4 for 5? This completely trumps Fire Elemental (the only other 5/4 for 5 in Red). He’s a pretty beefy guy if and when you attack with him. Being an Warrior allows you do to some fun things with him in a Tribal sense (if you’re into that type of thing).

Alright, let’s get to his ability, which is pretty saucy. It’s a triggered ability, and there’s nothing you can do on your turn that makes it happen. You have to sit and wait for the other players to do something. It all fits with the flavor of this card (though, it feels a little White instead of Red).

Whenever a creature an opponent controls attacks, if you’re the defending player, put a 3/3 red Ogre creature token onto the battlefield unless that creature’s controller pays 3.

Remember kids: it’s whenever a creature attacks you; it doesn’t say it has to deal damage to you or whenever an opponent gets attacked. While this is a great deterrent to get people from attacking you (sadly, not always the best option in Red), it’s one of the better political Generals in Worldwake.

It’s easier to break this down to three abilities:

Realizing that, let’s see how we can break these.

1. A creature attacking you.

Now, most players are not going to say “Wow, that sounds like a really good deal; I attack you and you get a creature.” You’re going to have to entice them to come over and attack you. And you’d think Red would have some cards like that. What? It does? Wow, seems like a good time to throw down a list:

Alright, most likely not the best looking list I’ve ever put together. Red is more known for forcing its own creatures to attack than making an opponents’ attack. If there was only a way to make that work in your favor (Hint: in Worldwake there is rumored to be a way, and it’s Red, as if it were a trader of some sort…). Once you get something like that, that creature would have to attack, triggering this whole thing.

Of course, there is one creature that just may outshine all other possible cards for this situation: Fumiko the Lowblood.

…Creatures your opponents control attack each turn if possible.

Ok, in a multiplayer game, they may not have to attack you, but this is where the whole politics thing that you should start be messing around with comes in.

Besides the obvious (you get a creature to block the attacking creature), there’s some fun things you can do with this. All of the creatures are Ogres, so anything you would normally do with tribal, you could do with this (Hint: Coat of Arms). But Red has a few ways to go even further:

So, you can get some options that allow you to abuse the creatures coming into play. Not listed: everything else you can do while the creatures are in play.

And here’s the one that could get your friends to complain when you pull out this deck. If they get to pay the 3 mana, you don’t get your guy (paying a tax for you not to get a blocker (which feels like a White ability). This toll-like ability completely fits within the character (read Doug’s article for the gist of it) and it’s a cool ability that we haven’t seen before. The easiest thing you can do is just keep blowing up their lands to prevent them from paying the 3. 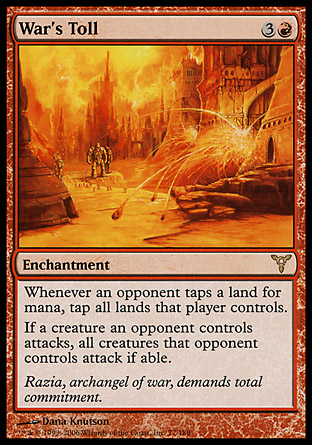 But there are other ways of preventing them from paying it:

But the best card for this deck that works on multiple levels? War’s Toll. Suddenly they’ve got to choose between playing a spell or swinging at you. If they do swing, they can’t play another spell or get the risk of getting quite a large number of 3/3 tokens staring at them.

Again with the politics and the thinking.

Final Word: At first, I kinda brushed over this guy, not giving it much thought. But then with a little research, I discovered that I would play mind games with everyone at the table and teach the newer players about multiplayer fun. “Oh, you don’t want to attack into me, I’ll keep getting guys…”

I already pre-ordered a foil for my General.

This entry was posted on Wednesday, January 27th, 2010 at 1:17 am and tagged with Kazuul Tyrant of the Cliffs and posted in EDH, Magic: the Gathering, Worldwake. You can follow any responses to this entry through the RSS 2.0 feed.
« Worldwake EDH General Review – Anowon, the Ruin Sage
The Really Big Worldwake EDH Review »