One of the hardest concepts to get in EDH is the Command Zone as it’s not really played in “normal” Magic. So, what I’ve done, is made a video about the Command Zone. Yes, that’s right, we’re doing videos now.

No, this does not mean we’ll do videos all the time, but for certain things we will. After this video, I’m working on the Partial Paris Mulligan as well. If we get a big game going or want to show something that would be better on video then to write it, we’ll go that route.

So, without further ado, here’s the first of a series of videos: The Command Zone.

While it’s a little straight forward, I’m still trying to find my place with what to do with videos for EDH. In the future there will be a little more humor and a little more people besides me.

Remember these things about the Command Zone:

If anyone was confused about the Command Zone before, hopefully this will clear it up a little. If it hasn’t, sound off on the comments below.

For a piece I’m doing next week about Pimping your EDH deck, I need more evidence. Pimp Magic cards = Foil, foreign, signed, or altered cards. I’ve got some pics already but I want more. You want your awesomeness shown on this page, send me pictures (99ehdproblems @ gmail.com). Brag to your friends and other anonymous people online (please note: this is for EDH decks only. Don’t just send me a pic of your Vintage goodness).

Here’s a pic some of my old 150 Highlander deck that was pimped out (that’s now in EDH decks) to give you an example: 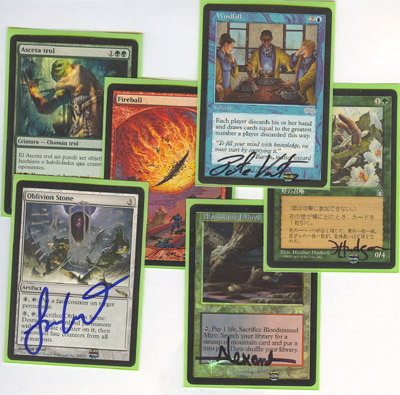 One response to “99EDH Video – The Command Zone”