Vote for the 2016 Commander Oscars

The 2016 Motion Picture Oscars are this weekend so I thought, “What were the best Commander cards printed in 2015?” There were so many criteria that I decided to break them out into their own individual category. Just like the Oscars. I wanted to throw an awards show for the best Commander cards from last year. This is a nice first step; maybe next year I wear a tux or something.

I took data from the ever wonderful EDHRec.com to gather this list. But this is more than just seeing which were the top five cards of each category were. Everyone has their favorites. You are going to vote on them. And on Sunday, February 28th, I’ll announce the winners.

Oh, and one random winner is going to win my review copy of the Classic Art Tokens from the Kickstarter that everyone’s been talking about. The Kickstarter won’t be shipping their cards out until August of this year; you can have them months ahead of everyone else. I’ll do more of a review at the bottom and how you can enter and fill in your ballot.

And now, the nominees for the 2016 Commander Oscars.

From the Vault Lifetime Achievement Award
Akroma, Angel of Wrath

Obviously having tokens of classic art pieces are a personal preference, but these are great enough to have people take a second glace at them. These tokens are of the highest quality; the print quality is amazing, and the way the cardboard feels in your hand is a nice, sturdy thickness. Everything on the card looks fantastic. The gold border is striking enough so you know you’re dealing with a unique card on the battlefield and to evoke the idea of card art in a frame on a gallery wall. The layout is wonderful (I like the power/toughness box in the center of the card), and all of the relevant game information is visible enough not to take away the focus of the main reason why you want these tokens: the art.

Part of the appeal, besides just the great art in general, is a bunch of the humor you have in all of these different creature types. Some of these could have gone to simple and easy choices but it didn’t, and that’s what makes this a fun bunch of cards to hold in your hands. To have the Soldier be George Washington (Sorry to all the British out there), Horror be The Scream, the Germ token is represented by a plague doctor, and Worm be a guy in a library (Book Worm) is some of the great humor you see in the art. Since I don’t know all of the arts, it has the art piece and the artist so you can even call it educational as well. The only art piece I really didn’t like was the 4/4 Dragon one, but if you’ve got one personal misstep in over 100 cards, I think that’s pretty great overall. 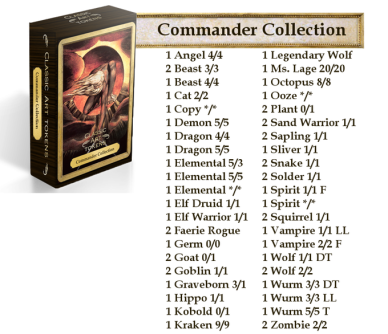 Again, it’s up to you if you like the idea of the real world coming into your fantasy world as you play the game. I know plenty of people who like card alters so something like this in a Commander setting doesn’t feel out of place. They’re beautiful, well made, and something I think is a fantastic idea.

I could keep these cards, but I want someone else to have them and show them off. As you see to the right, here’s what they have for the Commander collection that I suggested should be offered (I’m sure I’m not the only one but I’d like to think I helped). I bought into the $30 tier, one for every token they’ll print, to show you that it’s not something I’m shelling. I don’t support many things that get offered my way because I want to make sure that I believe in that product. This is one of those times where I’m happy to add to the voices out there that love them already. These cards are fantastic and as a Token lover, I want to keep these with my Commander decks.

Vote in the Commander Oscar Ballot, and one lucky person will win my review set.

Check out the Kickstarter here.