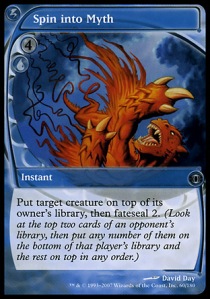 The Rules Committee came out yesterday and made a fundamental rule change about Commander. Here’s the important part:

If your commander would go into the library or your hand, you may choose to put it into the command zone. It’s as simple as that. Just like with the graveyard, if you want it to go into the library/hand, you’re more than welcome to let it. Note that this is a replacement effect, but it can apply multiple times to the same event.

I am not in favor of this rule change. But, to be fair, I haven’t played with it yet and that’s usually the best way to get to know something (playtesting is king). Daryl Bockett (@the_casual_guy) has:

To all giving @SheldonMenery crap,my group has been playing these rules for 3+ years without trouble.The Social Contract is a better fix

Hello. Is this thing still on?

Welcome, young and old, to the new 99CMDRProblems. Just so happens to be the old 99EDHProblems.com. They both direct here now.

Anyway, I’m getting the itch to write about Commander again. With the new Commander 2013 decks coming out, I know that everyone is excited for them. To be honest, I’m more excited for this product than I was for Theros. Commander runs deep through my blood and it’s the only format I have at least one deck built for. But that’s the problem, as a Johnny, I want to build all the decks.

Finally, after deciding it wasn’t going to be manageable to build every deck possible, I mapped out what decks I actually would play. Rather than just a novelty deck that I could go “hey, that was fun” deck and take it apart, I came up with 18 decks. Obviously, there are more than 18 Commanders. So what to do with those spare ideas?  I was thinking, “Hey, I could create a Tumblr about this. Get some reblogs, and it could all be groovy.” Then I was like, “Wait, I have a Commander blog I can write on. Why don’t I do that instead?” And that’s how this ended up here instead of Tumblr. (It’s not that I don’t hate Tumblr, but this is most likely the best place for this style of column)

Once in a while (knowing my schedule and everything else going on), I’ll write a deck idea out here. Not the whole deck, mind you, but just enough to have something to start with. I still don’t like the idea of the full 99 down on paper and have people take that as the only way to do it, however a place to get people started with a certain Commander seems good to me. These aren’t going to be a complete primer of how to play the deck or anything, just how I would build the deck. There’s some train of thought thinking here and it’s really just the first draft of a deck; just enjoy the ride.

Enough about the backstory. You want the deck. Let’s get to it… END_OF_DOCUMENT_TOKEN_TO_BE_REPLACED