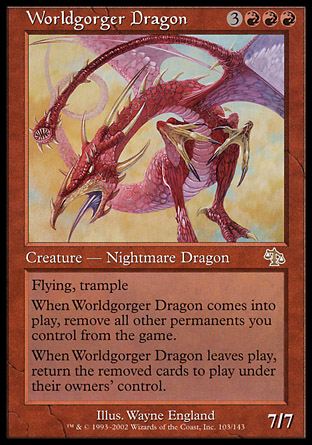 Sheldon releases another one into the wild:

We don’t unban cards lightly, but it’s time for Worldgorger Dragon to get out of the penalty box. It is no longer a particularly strong example of unwelcome, format-warping, combo-play style, but simply another infinite-combo piece. Those applications are narrow enough that it should not cause problems for social players, and the type of player who wants to play this kind of infinite combo isn’t going to play a more fun deck because Worldgorger Dragon is available. Thus, since it’s a goal to keep the list as short as possible and focused on more fun-oriented games, we believe it can come off the list.

While people were wishing the other Dragon would come off this list, I find this one to be somewhat acceptable. It’s not the only two card combo on the list: Lion’s Eye Diamond is also there. Is this a card I’m going to shove in any of my decks? Most likely not. If you’re playing this, I’m going after you.

The Banned list has been updated (as well as that bug issue where the Banned Commanders were showing up as banned in decks. I didn’t see that issue and it’s now fixed).

This entry was posted on Wednesday, June 15th, 2011 at 12:23 am and posted in Commander, EDH, EDH Bannings. You can follow any responses to this entry through the RSS 2.0 feed.
« The Top 10 Proliferate Cards for Commander
Commander Night at Card Kingdom »