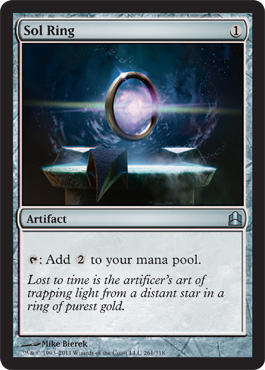 In Every Commander Deck

I did decide to play the two extra mana to recast myself for resuming this blog. Most of you don’t really need a reason, and that’s fine. I’ve done some growing up since a few months ago (the list time I wrote here) and I would just like to say a few words and let you get ready for Monday.

No, I’m not leaving GatheringMagic.com (Formally ManaNation.com). In fact, let me be the first to tell you that I’m no longer going to be published on Mondays. Trick (My main editor and head honcho over at GM) is actually moving me to Thursdays; Monday will be my last Monday there. I would really encourage you to check it out as there is a pretty neat surprise. Does it have to do with the upcoming Commander product? It just might.

But starting this blog up again I can do some silly and fun things that I couldn’t do over at GM. It’s not that Trick is mean or anything, but I bet he would’ve been less than amused at my foils piece that I did Wednesday without some writing to go along with it. Yes, I will do some small stuff like that and some extra notes about what I’ve written about over on GM. No matter what I write, and how long I’m given, I always think of stuff to add later, and this will be a perfect spot.

The other main thing is Card Kingdom. If you haven’t been paying attention to Twitter or my other blog (MTGColorPie.com), you don’t know that they opened a fantastic new store here in Seattle. I was tapped to write about it (With the last part coming soon), and it just seems rude to write about another online store even if I was talking about the offline component on a competitor’s website (GatheringMagic is financed by CoolStuffInc.com).

Card Kingdom is starting a casual/Commander night every other Tuesday night starting the 21st and I would like to talk about it/take photos and would think of it to be really rude to write about it all the time on GatheringMagic. That’s me personally and I would like to keep those two separate.

Another reason why I’m coming back has to deal something with StarCityGames. No, I’m not the guy who writes the “99 Problems” column over there. I already said I won’t write decklists (I actually took the pages off this site) and he argued for staples when I did the opposite. I won’t speak much on this issue as I’m currently writing a piece for QuietSpeculation.com about this very situation. All I will say is that I am not happy with StarCityGames at the moment. If any of the editors are reading this (which I know isn’t the case because there wouldn’t be this issue), feel free to contact me (99edhproblems, gmail.com).

Now on to happy news. One thing that I did miss was getting guest submissions sent here. This was one of the launching pads for Derfington and his work over at QuietSpeculation. I did have several people wanting to take over 99EDH in my absence, but decided against it. I am taking Commander/EDH articles again if you want to see some of your stuff published. I will help you edit it and find your voice, but since I’m not paying you for these pieces, don’t expect a fast turn around. It was part of this community thing that I liked. Send me your work at (99edhproblems, gmail.com) and we can go from there.

In all, I’m glad to have this blog up and running again. I wouldn’t expect posts every day, like my other blog. The best way to follow and get a hold of me is through Twitter (@MTGColorPie). Now, let me go blow some dust off my cards here and you get to GatheringMagic on Monday.

This entry was posted on Friday, June 3rd, 2011 at 8:53 pm and posted in Uncategorized. You can follow any responses to this entry through the RSS 2.0 feed.
« 26 Scars Block Foil Cards You’ll Want a Year From Now*
The Top 10 Proliferate Cards for Commander »