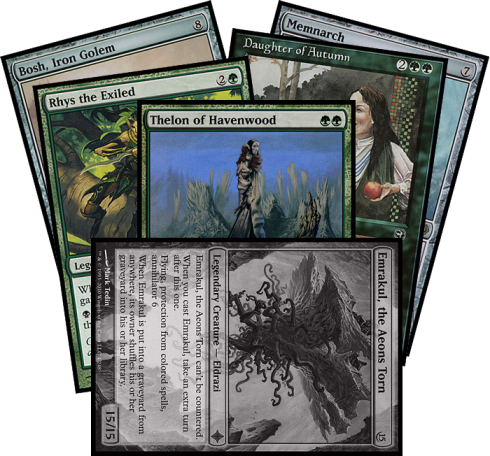 Editor’s Note: While I haven’t written on here since the big change in the format, it will be addressed. I have talked about it over on ManaNation, and eventually they will be linked over here. But now is not the time nor the place for that discussion.

The scourge of all that is unfun in EDH/Commander is finally over. Yes, let’s take a look at the announcement and bask in all of it’s glory:

This is one on which we listened heavily to what the community was saying, and nearly without exception, everyone hates Emrakul. It’s a card that makes the game devolve into a war over a single card whenever it hits the table. Add to that the fact that its combination of abilities made is seriously unfun to play against. We had already had our eye on it, and when the community spoke, we listened.

Alright, seriously. For the two of you that are crying about this move (don’t worry, you’ll like the other announcement then), Emrakul was a bad card for EDH. It’s unfun and it was practically the only card you had to prepare yourself against in any metagame. “But there are ways to get rid of it!” Yes, But with the culmination of all of it’s abilities, it was just too unfun for 99.9% of EDH players. It could go in any deck, which made it worse. For my GDS2 entry, it was that one card I said shouldn’t have been printed because it was unfun. The needs of the many outweigh the needs of the few. Be glad it’s gone so we can focus on the next bit of news:

Rule #2 is amended as follows:
When building a Commander deck, the mana symbols in the text box are just as important as those in the cost of a card. The Commander’s color identity restricts what cards may appear in the deck.

* The color identity of a card is the colors of all mana symbols on the card, along with any color defined by a characteristic-defining ability (CDA) in the card’s rules text.

* Cards in your deck may not have any colors in their color identity not shared by your Commander.

* Mana you produce of colors that are not in your Commander’s color identity is colorless instead.

* Mana symbols in reminder text are not part of color identity.

The RC spends quite some time considering the needs of the format itself and the voices of the format’s player base, making an effort to strike the balance that while keep the format strong and healthy for a long, long time.

While it’s great that they’re finally listening to us, here’s the big deal: Finally you can play with the Generals/Commanders he mentioned (All of the ones are in the picture above). So, while you players lose Emrakul, you can now play with Memnarch (I’m finally glad that Tolarian Academy is banned). Basically all of the other rules are the same, only that color now applies to mana symbols in the entire card. Some other changes:

Apparently color identity doesn’t mean the card is changing colors, but just the overall feel of it. I got a little excited with some of my ideas, but was cooled down by the Twitter crowd. Make note of this people.

Putting on my MTGCP Magic designer cap, what this means can be very exciting in the future. If you noticed, there hasn’t been too many Legendary Creatures that have been printed off-color recently. Why? Because they couldn’t be used as Generals/Commanders and a large part of WotC guys play EDH/Commander. Why print something if players couldn’t use them in that format? So, I guarantee that in the future there will be off-color Legends that will be printed. Why? No idea, but that opens up a whole lot of design space to play around in.

So, tell all your friends about this change. Knowledge is power. These rules take effect December 20th. The EDH/Commander Banned List has been updated.

This entry was posted on Tuesday, December 14th, 2010 at 12:40 pm and posted in Commander, EDH, EDH Bannings. You can follow any responses to this entry through the RSS 2.0 feed.
« The Really Big (Long Overdue) SOM EDH Review
Stone Cold Commander of the Century (Of the Week) – Mannichi, the Fevered Dream »