By the power of Grayskull, I HAVE THE POWER!

Editor’s Note: I love getting articles from people, and I love posting them if they’re really good. This is a guest post by a Mr. Max Kautsch, and I hope you enjoy it as much as I do.

I love EDH.  Who doesn’t?  I love using cards I’m too cheap to have more than one of.  I love using one-ofs from my collection that have never before seen play.  I love the staggering deckbuilding possibilities inherent in over 7,000 card choices.

One thing I do not love: the way multiplayer games bog down as each player tries to build up for an alpha strike that will defeat one or more opponents while not leaving himself exposed to a deadly counterattack.

My solution?  A deck that will end the game quickly one way or another.  Kill or be killed.  None of this interminable posturing and politicking.  A deck like that would probably have to involve some devastating combo that can just win the game.  So what, you say, kill combos have been done ad nauseam.  Ok, maybe so.  But by that logic, all control and aggro strategies have “been there done that.”  So I think the question becomes, what would be a unique, not-too-broken way to combo out against all your opponents at once in EDH?

When I Gathered (I’m going to use Magiccards.info for the links. Why? Because I’m the editor, that’s why – MTGCP) for possible combolicious generals, I couldn’t help but notice that the rules text for Sek’Kuar, Deathkeeper beings with the word “whenever”.  As all good Johnnys know, “whenever” can be the key to going infinite.  So why not give it a shot?

A closer look at the Deathkeeper shows that the card needs a sacrifice trigger to put the keys in the ignition of the car to infinity (ok, no more extended non-Magic metaphors), and I have loved Ashnod’s Altar for some time (Enduring Renewal, anyone?).  Phyrexian Altar seems like another good idea.  If I can figure out a way to get non-token creatures to the graveyard, General Sek’Kuar’s trigger is a win condition once the deck goes infinite.  And in EDH, that win condition is effectively always in my hand via the Command Zone. 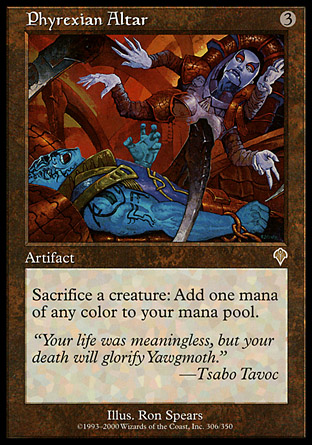 Much like the Wedding Altar. Know what I'm sayin' fellas?

The deck seemed like even more of a “go” after I thought about how fun and not-so-broken it would be; ultimately, if your opponents don’t have a Volcanic Fallout or any of the other umpteen million ways to stop an army of 3/1 haste creatures, that’s their problem, not yours. 🙂 To say nothing of the fact that a well-timed counter disrupts the flow of any combo, and instant-speed removal on a combo piece is disaster.  Further, if I know anything about Ashnod’s Altar combos it’s that it takes a minimum of 3 cards to win, and that’s if you’re satisfied putting token creatures into the yard.  For this deck, actual creatures would have to hit the yard to take advantage of the Deathkeeper.

Without further ado, my process for EDH combo construction, or as I like to call it, Deathkeeping It Real.

After some testing with Grapeshot and Tendrils of Agony, among others, it became clear the deck didn’t need any more win conditions than these.  The fact that the Deathkeeper takes up permanent residence in my hand is the main reason to go light on this component of the deck.

The most important part of the deck.  The decision to go with the Altars hinged on their low casting cost and my nostalgia for Ashnod’s.  From there my options were limited only in the sense that there are many more infinite combos out there that involve token creatures.  Finally, to win on one turn you need to have the mana available to execute at least one win condition as well as the combo.  So the choices were as follows:

The old "No, you first" routine.

Obviously, a deck like this is going to benefit from Grave Pact, which forces your opponents to lose their creatures as you gain the benefit of sacrificing yours for one nefarious plot or another.  What are the best ways to take advantage of this sick card?  I settled on the following.

Step Four: Rounding out the Deck

Card advantage (to find your combo pieces) and control (to give yourself time to combo out) and are essential elements to any combo deck.  The following cards are tutors of one kind or another.  Wish I had Vampiric Tutor, too 😦

A key element in a non-white deck (no Wrath, no Day of Judgment etc) is mass removal.

Targeted removal; for those specific problems that need solving:

The deck also gets a lot of mileage out of utility creatures to take advantage of Corpse Dance and Uneath.  Thus, cards like Wall of Blossoms, Caldera Hellion, Elvish Visionary, and Big Game Hunter fill in some holes the deck that might otherwise be filled by non-creature spells.

Mana acceleration is also nice for combo decks.  Since our pool of cards includes green, there’s no reason not to include the best green acceleration like Skyshroud Claim, Wood Elves (particularly nice with the Ravnica duals), Sakura Tribe Elder, Yavimaya Elder and Kodama’s Reach.  Like any combo deck, mana is at a premium, so it’s good to have green along to help with that.  Thunderscape Battlemage and Helm of Awakening are also great non-green accelerators.

Counterspells to protect the combo in a non-blue deck?  Well, in EDH that’s not as much of a problem.  Wild Ricochet has been an EDH all star, and Fork and Autumn’s Veil do what they are supposed to do.

Finally, card drawing in a non-blue deck is always something of an issue.  The tutors help, but I also added
Harmonize, Phyrexian Arena, Sensei’s Divining Top, Scroll Rack, Night’s Whisper, Dark Confidant and Sylvan Library.  Regrowth and Eternal Witness keep non-reanimation recursion a factor, which is huge in EDH where you can only use one copy of each card.

A three-color mana base is not particularly difficult, so suffice here to mention the Onslaught fetch lands, the Urborg and the Phyrexian Tower to be particularly helpful.  Mostly, the deck is concerned with getting its mana because as long as its game plan materializes there is a decent chance for victory.

Lots of games seem to go like this: tutor for an Eternal Witness ASAP, then return the Tutor to your hand when the Witness comes into play.  Tutor for Corpse Dance so you can repeat Witness-for-tutor and search your deck for the combo pieces.  Play the combo and beat all your opponents simultaneously in one huge alpha strike.

Any thoughts and additions much appreciated.  Good luck, and Game On!

This entry was posted on Friday, August 20th, 2010 at 1:43 pm and tagged with Sek'Kuar Deathkeeper and posted in EDH, Magic: the Gathering. You can follow any responses to this entry through the RSS 2.0 feed.
« Tarmogoyf is a Pair of Bad Idea Jeans
SOM EDH General Review – Skithiryx, the Blight Dragon »