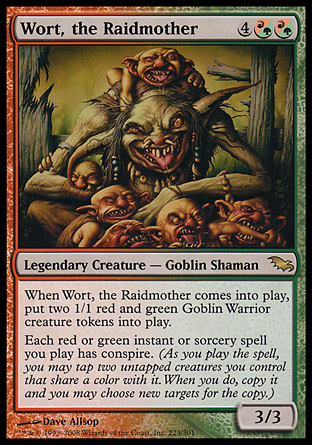 With a face only a mother could love. Wait...

Editor’s Note: It’s the time again. Fan favorite Jake Kessler is back once again with a new EDH post. This was originally seen on the highly recommended Magic Deck Vortex and on Jake’s on blog, Competitive Casual, and is being published here with permission from both of them. I kept wanting to write the title as Mana Said Knock You Out.

I have a few EDH decks together at any given time; I think at present I have about five or six. This time, my general is a real mother.

I’m certainly not the only person ever to make a Wort deck, and there are several clear directions a deck builder might run with her. But let’s do something a little differently for this article. Rather than break down the deck, let’s first break down the general.

So what sort of card, exactly, is Wort the Raidmother?

Perhaps the flashiest aspect of Wort is her conspire ability. Players have always been excited by opportunities to copy spells, from Fork in Alpha all the way up to Echo Mage in Rise of the Eldrazi. This is especially true in EDH, where longer games and multiple opponents mean really big spells have the potential to be truly powerful.

Here’s how conspire works, specifically: When you cast a spell, you have the option to tap two of your untapped creatures (Wort and her tokens are good for this). Make sure that each of the creatures shares at least one color with the spell you’re casting (if you want to copy Giant Growth, for example, both creatures ought to be green). You only get to conspire once (you can’t tap all your creatures to get a bunch of copies). The copy, if you make one, is a separate spell that can be countered or responded to separately. Assuming neither spell is countered, the copy will resolve first, and then the original.

Wort, in many ways, is a comparable copying engine to the famous tournament heavyweight, the Mirari. Like the Mirari, it gives you one free copy of every spell, provided you pay the price. Unlike the Mirari, though, Wort’s trigger doesn’t cost mana. Instead, you need to tap creatures. This is both better and worse than the Mirari; you don’t need to save an extra three mana for the copying, but you do have to have creatures of the right color(s) on the table.

At first, I was all gung-ho about adopting a strategy that focused on exploiting Wort’s conspire ability as much as possible. As I explored the possibilities, however, I realized something: While conspire does reward you for playing a lot of instants and sorceries, it also requires you to have red and/or green creatures in play at all times in order to abuse it. Yes, Wort does come in with a couple of kids, but 1/1 Goblins don’t tend to stick around very long. I realized I was often going to be depending on having another creature (or two, one of each color) on the battlefield with Wort in order to make my spell-copying plan work.

Ultimately, I decided to limit my instants and sorceries to a smaller portion of the deck. The ability to copy spells is powerful, it’s true; but I wanted to be sure I would always have the creatures in play to support that plan.

Here are the ones I kept in:

Yes, I’m aware the deck needs Gamble. I haven’t convinced myself to drop the cash on it just yet.

I want to talk to you for a minute about card advantage. Card advantage is a term that gets tossed about by a lot of players, but I’ll go ahead and explain it quickly in case you don’t know it.

Card advantage is a very old concept, but decks like Jund in Standard/Type 2 this year have recently made it famous all over again. The Jund archetype is basically built on card advantage and nothing else: very nearly every action card in the deck is a 2-for-one or better. Bloodbraid Elf, Jund’s poster boy, cascades into an unknown free spell when you cast him, while the sinister Maelstrom Pulse can take out multiple threats at once.

Wort is a lot like Siege-Gang Commander because of the permanent advantage she provides. In a normal deck, she is a three-for-one as she comes in with two tokens. In EDH she’s even better because you can cast her from the Command Zone without giving up a card in hand; she is actually a three-for-none.

As you can likely tell, card and permanent advantage are concepts that intrigue me as a deckbuilder, and I decided to keep them close in mind while developing my Wort deck. Here’s a selection of some cards that made it into the deck, organized by level of advantage:

As you can see, the token-making theme I decided to run with has paid off a lot in terms of card and permanent advantage in the deck. The strategy at work here, loosely, is to use large amounts of tokens to outnumber and overwhelm my opponents by forcing them to make bad trades and by always getting top value from my own plays.

The thing about all EDH generals is that they often come back multiple times when you kill them (since you can always recast them from the Command Zone). While this resiliency is useful if your general is “only” a powerful threat, it’s potentially even more powerful if your general does something useful every time it enters the battlefield. In short, “enters the battlefield” generals like Wort are a bit like Murderous Redcap: they come in and do something cool, then they die, then they come back and do that same cool thing again. Each time Wort dies and returns, I net two tokens; those tokens stick around after her death (usually), and my opponents have to either play around them or deal with them separately.

EDH generals have this sort of revival mechanism built into the rules of the format, but there are other ways to get maximal use out of an “enters the battlefield” ability. Cards like Cloudstone Curio and Erratic Portal can also “bounce” useful creatures back to my hand so I can use their abilities again.

Creatures with “enters the battlefield” abilities also sort of fit into the card and permanent advantage category discussed above: I get a whole extra effect when then they come in, separate from the fact that I’m also getting a creature. Indrik Stomphowler, for example, is both a Naturalize and a 4/4 beater in one. Getting that advantage one time is efficient; getting it over and over (from a lot of creatures or from one creature repeatedly) is powerful indeed.

I’ve included a lot of these sorts of creatures in the deck, as well as cards to help exploit them. Here are a few:

I have a confession to make: I love Warp World.

The first Warp World deck I built was back in Alara-block Standard, and it was a beauty. It ramped up into lots of mana and permanents with Fertile Ground, Trace of Abundance and Siege-Gang Commander, then “warped” into Broodmate Dragon, Hellkite Overlord and Karrthus for the win. The deck was lean, with no instants and sorceries to whiff on, which let me get an edge against opponents when I was warping since they certainly weren’t streamlined the same way. Still, I packed a playset of Shriekmaws in there just in case they flipped up something scary.

And Wort was there too. Shadowmoor was in Standard at the time, of course, and the Raidmother not only helped my permanent count with her tokens but she let me conspire the Warp World – maximizing my yield while giving my opponent a second chance to whiff.

So from the time I decided to make a Wort EDH deck, I always knew I was going to look at putting Warp World in it. At first, when I was looking at a more instant- and sorcery-driven build, Warp World wasn’t a great piece to include: all those non-permanents were whiffs if I warped into them. As the deck grew more creature-heavy, though (especially “enters the battlefield”-creature-heavy), my all-time favorite red sorcery started looking more and more appetizing.

The final version may as well be a bona fide Warp World deck for the philosophy that went into it. There are precious few cards left in the build that are disappointing to warp into, and “living the dream” – successfully casting Warp World with Wort’s conspire – almost guarantees an exciting, explosive win.

Here are a few that particularly shine:

Regal Force – Nets a lot of cards.
Essence Warden – A lot of life.
Lotus Cobra – A lot of free mana.
Goblin Assassin – A lot of dead things.
Rampaging Baloth – A lot of 4/4 Beasts.
Avenger of Zendikar – A lot of really big Plants.

One final word on Warp World: haste makes a big difference. I never know what the table is going to look like post-warp, and if I’m unlucky enough to set somebody else up with their Kiki-Jiki– Magister Sphinx combo or lethal combat damage in Emeria Angel tokens, passing turn is not something I want to be doing. Cards like Fires of Yavimaya, Goblin Chieftain, Goblin Warchief, Anger and Conquering Manticore ensure I can push through some damage right away post-warp.

This is the kind of obvious that stares a deckbuilder like me in the face for ages before I pick up the card one day, blink at it, and ask out loud, “Wait – she’s a Goblin?” 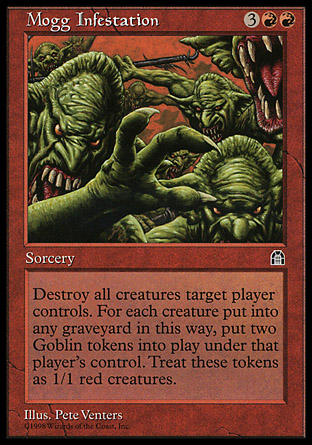 Yes. She is. Not only is Wort the Raidmother a Goblin, but so are her two tokens. So what can we do with that?

There are any number of tribal Goblin effects that synergize with Wort – so many, in fact, that the “little Goblin subtheme” I had in mind has actually blossomed into a sizable portion of the deck. These are the cards I’ve selected to use which either are Goblins, make Goblin tokens, and/or make other Goblins better:

Extra credit: The bit about haste I just said in the Warp World section applies here, too. Dumping a bunch of Goblins on the table with an effect like Goblin Offensive is impressive, but following it with a Warchief or Chieftain can often mean getting in some significant damage before the next player can get out his Wrath of God. Like any Goblin deck, Wort wins with consistent small attacks as she does with giant “alpha strikes”.

That, then, is the deck. Perhaps it is a madcap, mismatched jumble of a spell-copying deck, a Jund deck, a Cloudstone Curio deck, a Warp World deck and a tribal Goblin deck. Perhaps it is simply a versatile aggro deck with a few different viable win strategies. I’ll leave that for you to decide.

At this point, you probably know the majority of the deck, but here’s the full list for your curiosity.

So there she is, my friends. Until next time, may you always live the dream.

This entry was posted on Thursday, July 22nd, 2010 at 1:38 pm and posted in Competitive Casual, EDH, Magic: the Gathering. You can follow any responses to this entry through the RSS 2.0 feed.
« The Really Big M11 EDH Review – Artifacts and Lands
Format Variant – Peasant Dragon Highlander (PDH) »

2 responses to “Competitive Casual – Mama Said Knock You Out”