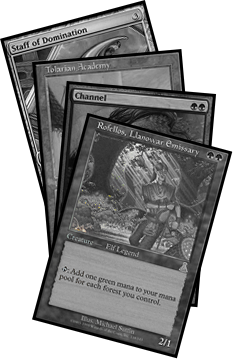 Oh, some changes that people were clamming for happened. Let’s get right down to them:

It’s clear that especially in the post-Eldrazi world, super-fast, super-reliable early mana production is dangerous to the format. Rofellos, Channel, and Tolarian Academy have all demonstrated they can do this with quite a bit of ease.

Unbanning Rofellos as a General was a year-long experiment that didn’t pan out. We had hoped it would lead to a spate of fun-and-full-of-fat decks, but that wasn’t the case. First- or second-turn Channel into Emrakul or similar things are simply negatively format-warping. Tolarian Academy, while not quite as explosive as the Rofellos and Channel, fuels easy early-game super-production of mana.

We’ve had our eyes on Staff of Domination for a long, long time, and were hoping that someone would find uses for it that didn’t include the term ‘degenerate.’ That hope proved fruitless. Strangely enough, it’s the first and cheapest activation that has proved the most troublesome.

The watchword of the Rule’s Committee’s vision of the format is ‘interactive.’ We’d like to foster an environment where ridiculous things happen, but that everyone playing has a chance to do them. Early, reliable, hyper-production of mana often leads to a single player playing by himself and others watching, and that’s not what we want for EDH.

With the creation of the Eldrazi, getting easy mana to cast these big beasts early did hurt games, but you had to do it in order to keep up with the Jones’. While I’m sad that Channel has now got to go ruining my Verdeloth deck (is it time to take it apart now?), I see why it has to go. I was wondering why it was still left in the format but now it’s gone. The Refellos experiment was going okayish until Eldrazi came out and I’m surprised it took this long to see Academy axed. Staff of Domination never was used in a casual sense but always a degenerate combo one. None of these changes is a bad move.

These bannings take effect June 20th. Changes to the Banned List have been made.

This entry was posted on Friday, June 18th, 2010 at 12:16 pm and posted in Uncategorized. You can follow any responses to this entry through the RSS 2.0 feed.
« Building a 5-Color Mana Base on a Budget
Weekend Commentator Diversion – Do You Play Commander on MTGO? »