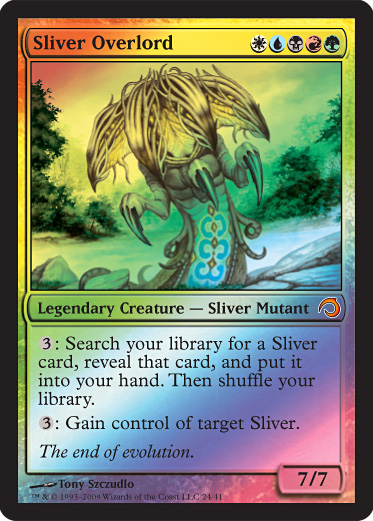 Released last weekend was Premium Deck Series: Slivers. While it’s a 60 card deck, it’s a great place to start if you love Slivers and have wanted to stat out in EDH (Rules here). Due to the request of my twitter audience (@mtgcolorpie), I’ve been asked to finish off the deck and make it into a Full EDH deck. But there’s a problem.

It’s an unhealthy hate that I’m sure the next time I’m play Legacy, someone will beat me with a Slivers deck and it will be poetic justice. I am biting the bullet to make you, my audience, happy. Don’t say I never did anything for you (you know, besides writing). This will also be the first deck that I haven’t played so there might need to be some tweaking.

For the time being, this will also be the only Sliver EDH article on this site. If you build one, you’ve built them all (thanks to the wonderful linear design concept). I do, however, like the idea of the PDS and love the packaging; if there was another one, I might purchase it. (For those of you wondering where my journalistic “keep emotions and feelings out of your articles” integrity is, I don’t report the news). Let’s get started.

Since the Overload comes with this deck, we’re going to be using that one. Actually, it’s a better General than the Queen because it has two neat functions:

3: Search your library for a Sliver card, reveal that card, and put it in your hand. Then shuffle your library.
3: Gain control of target Sliver.

With these two powers combined, it is a very interesting General and you can still play the Queen and Legion in your deck, and to tutor them out. If you’re playing a Sliver EDH deck, at least use the Overloard as a General; it’s the most logical choice.

Looking at what’s in your PDS case

If you didn’t read Ken Nagle’s article about what he put in the Sliver deck, I would suggest reading it. It makes alot of sense of why they chose the cards they did. But since we get to add more Slivers to this deck, we can repeat and not have to awe some of the choices that ken did in making the deck. Ignoring land at the moment, let’s take a look at what the deck gives us:

Taking out some of the extra cards (Gemhide, Metallic, Muscle, Spectral, Virulent) so we only get one of each, it’s a very well put together deck. Right now, if I have every one of those Slivers in play, my Metallic Sliver would be this:

I’m assuming that as a fan of Slivers, you’d have at least one of each kind (save maybe Sliver Queen). The best way to look at this kind of deck is to make it a toolbox deck. For that, we already have two Slivers (Overlord and Homing) but we need to add the best card to this kind of deck: Survival of the Fittest. You don’t care if you’re dumping Slivers into the graveyard because of what will happen later.

Now that we know what direction we’re going in, let’s see what Slivers we can put in here that an “Enter the battlefield” or some other quality effect like that (ones that are in the PDS are in Italics): 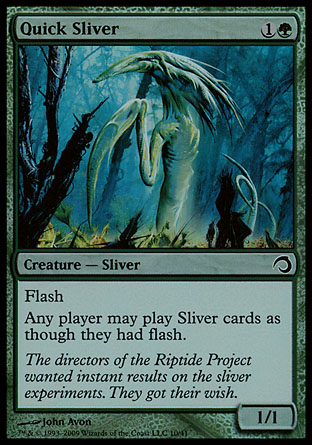 While everyone has different opinions about how effective any of these could be at certain times, there is one Sliver I believe to be the best out of all of these: Quick Sliver.

It’s because of this guy that we can play all of the other slivers at the best time possible. Large Frieball coming toward your face? Flash Pulmonic, then Darkheart to sacrifice slivers to gain life and put them on the top of your library. Need to tap an opponent’s team to go in for an alpha strike next turn? Flash in Telekinetic. How about that Terror going to target your Quick Sliver? Oh, I think Crystalline has something to say about that. Remember, if you build this is the toolbox, these aren’t hypothetical situations, these are real game scenarios. With this guy on the table, you’ll keep your opponents guessing about what your next move is and that’s a hard thing to do while you’re playing Slivers.

Speaking of on the table, my opinion is that there are some Slivers you just need to have on the battlefield to make this toolbox be effective and have it hum like clockwork:

Quick Sliver – Gives every other Sliver flash, including your General (please keep this in mind).

Homing Sliver – Uses the Slivers in your hand to go get other slivers. While he can cycle himself, he does no good for you in the graveyard, you need him on the battlefield. Yes, you have to discard the slivers in your hand, but that’s fine. Again, we’ll get to that.

Sliver Overlord – See above, but without all the discarding. Plus, it’s your General.

Gemhide Sliver – Most of the Slivers have a static ability (that means it works without tapping or using mana, it’s always on). Put them to work as mana sources and be able to put those Slivers in with Flash to make it really unexpected.

Hibernation Sliver – Most Sliver players might not put this in their deck, but I suggest you do. First, you start out with 40 life, so don’t worry about the life loss. Second, until you get Crystalline into play, this is the best way to protect your army. Third, you get to replay Slivers. It’s really good.

But you can’t have an EDH deck that’s nothing but Slivers (sure, you could try, but let’s not). Thanks to two Tribal blocks, we have some fun toys to play with. Let’s see what else we can throw in here.

Unnatural Selection – Alright, so this is in Apocalypse, but this is one of the better cards out there for this deck. It allows you to turn other creatures into Slivers; this is amazing for two reasons: Politics and stealing. If you combine Unnatural Selection and Sliver Overlord’s second ability, you can for 4 mana, steal any creature in play. That makes you a dangerous target. But by turning an opponent’s creature into a Sliver, you can make friends. If someone’s creature is about to die, turn it into a Sliver and boom, protected by Crystalline Sliver. Or it gets the bonus from Muscle Sliver, etc. This is how you make friends when you’re playing Slivers. This is almost the same as Amoeboid Changeling in the PDS decklist but better.

Door of Destinies – A staple for any Tribal EDH deck. Again, this makes you a target, but you can smash face pretty easily as well (Note: this goes along well with Hibernation Sliver).

Harsh Mercy – You want to have some fun at the table, play this. You’ll protect your Slivers while people are scrambling to bargain which creatures of theirs they want to save. Then, if you’re being nice, change some of the creatures with Unnatural Selection to Slivers to save them. Or, if you’re being naughty, change them to something else then what they said to kill them anyway.

Patriarch’s Bidding – Ah, the one card you’ve been waiting for. If you cycled away all of those Slivers (or Survival of the Fittest) or you get Wrathed, this will save you. After you’ve played this once, people will take you seriously when you start throwing everything in the ‘yard. Only downside: spending 10 minutes to find out what happens when all of the Slivers enter the battlefield at the same time. Note: You can’t use this with Unnatural Selection (they’re in the graveyard).

Shared Triumph/Steely Resolve – Both enchantments of abilities that Slivers have. Do not get Wrathed away (which is key).

Urza’s Incubator – Makes your Slivers cheaper to play. What’s not to like?

Sure, there is more stuff that you can do with a Sliver deck then I realized (but still no more Sliver EDH decks). There are certain things that I didn’t touch on that would be great for Sliver decks (AEther Vial (also lets you play Slivers as instants), Volrath’s Lab and Riptide Replicator both let you make Sliver tokens, Carnage Altar lets you sac your opponent’s creatures you steal), but to each builder their own deck.

If I was going to build a Sliver deck (being the Johnny/Spike I am), this is how I would build it. There’s no land in this decklist. I’m going to do an article about 5-color mana bases and I’ll defer to then (or if someone else wants to talk about it, it would make a great article to submit). If you want a full decklist of a Sliver EDH deck where he did the same thing but went a different direction, see mtgdecksource’s EDH decklist.

Fun combos in there (Flame Fusillade + Toxic Sliver + Vampiric Sliver = Kills all other creatures plus make yours bigger) but the most “Johnny” is the Eternal Witness one. Sure, playing her once is great, but how about multiple times? Remember Hibernation Sliver? If you turn Eternal Witness into a Sliver, guess what, return her back to your hand then play her again to get a card back from your graveyard, repeat as necessary. @BottsThoughts suggested adding Intruder Alarm into the deck: with Gemhide Sliver producing mana and Overlord searching for more Slivers, you could thin out your entire deck of Slivers. Just a thought, you know.

If you bought the Sliver deck and you want to play EDH this is a great way to start into the format. If you’re going to States this weekend, don’t forget to bring an EDH deck; most likely you’ll find someone to play with. As for now, I’m done with writing the word “Sliver.”